- Kick Off Meeting of the Training Program (3pm-5pm)

1. Briefing on the training program and general introduction on the conservation project of SPK (Shimoda Ichita)

2. Self-introductions from trainers and students

There are 3 main points from the message from Nakagawa

a) Site training: During the site training, we need to find out what are the purposes of creating these shapes and forms in this architecture complex

b) Ask yourself what is Sambor Prey Kok and what is Angkor Wat. Find the answer by asking senior experts and local people.

c)  Ask our own selves why we are here for? What is special about SPK in history and architecture?

5. Explanation of the Field Survey (from Chan Vitharong, Sopheaktra Suou)

6. Remarks on the daily affairs (from So Sokuntheary)

7. Remarks on the accommodation (from Yoshikawa Mai) 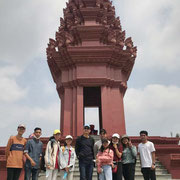 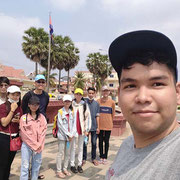 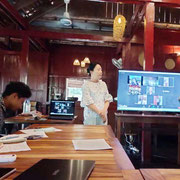 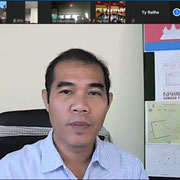 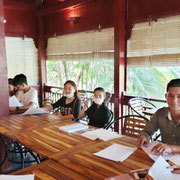 Ø  The discovery of the temples at Sambor Prei Kukwas in 1894.

Ø  Started the action of the preservation, conservation, excavation and restoration by the SPK Conservation Project in 1998.

Ø  Learning to analyze and deal with the certain problems in the local site.

l  Khmer characteristic during Chenla era has been influenced indirectly from India integrated critically with Khmer tradition and beliefs which created a unique Khmer identity.

l  After the end of the session, Dr. SO Sokunthearyhas encouraged us that in order to acknowledge critically in conservation work, we must figure out in any other better solutions which is well synchronized with time.

In the morning, the archaeology students checked in at about 10 am as we have been in Kampong Thom since Monday. In the afternoon, all students from both major met and introduced to one another at the hotel. At 3 pm, Professor Shimoda Ichita started the online lecture by briefing about the training program and general introduction on the conservation project of Sambor Prei Kuk. We also got another lecture from Professor Nakagawa Takeshi about the purpose of training program. He told us to understand the importance of archaeological sites in Cambodia especially Angkor and Sambor Prei Kuk sites. Some remarks from Mr. Chan Vitharong and Mr. Suon Sopheaktra as they explained us about the filed survey and setting the excavation trench. Before the end of the lecture of the first day Mrs. So Sokuntheary and Mrs. Yoshikawa Mai gave remarks about the daily affairs and accommodation.

As the first one she told us about the restoration, conservation and evolution of Derm Chan temple because this temple was not built in the same period. The central tower was built in the Pre-Angkorian. North tower and south tower were built in the Angkor period during the King Rajendravarmman II, in the 10th century. According to the inscription on the doorframe and the architectural elements from both towers.

Next, we went to N19 she has explained us about the structure was possibly built between Funan and Chenla period. She also explained about the position and the role of “Somasutra (water drain)” for worship in the temple.

After we moved to groups of Prasat Sambor, Mrs. Sokuntheary showed us about the general introduction of this groups temple but she focused on the Main temple N1 and also explained about the features of N1 (open on 4 sides) and method of the restoration of it. On the 10th century the King Rajendravarmman II has come there and built 4 more tower on the sub-directions.

In front of main tower there is a sub-tower (S2) that was called “Mandapa” and an inscriptions descried that a silver Nandin was originally dedicated on this pedestal.

In the afternoon we visited the last group of Sambor Prei Kuk is Prasat Tao. Prasat Tao was believed to be constructed at the end of 8th to the beginning of the 9th century by king Jayavarman II which is a later period than the northern  and south temple group that was constructed in the 7th century. The lintel, colonnette decorated around the door frame of the Central tower are still in good condition. There are two lions statue sitting position and their curly hair style and comical face features are impressive. These characteristic lion statues were found in Phnom Kulen. Form these reasons this architectural compound is said to be constructed in the beginning of the Angkor period.

We have visited the Tamom temple and structure of the ancient city Isanapura.

Lastly, Mr. Chan Vitharong has showed us about the  field survey and divided work for Architecture and Archaeology students. 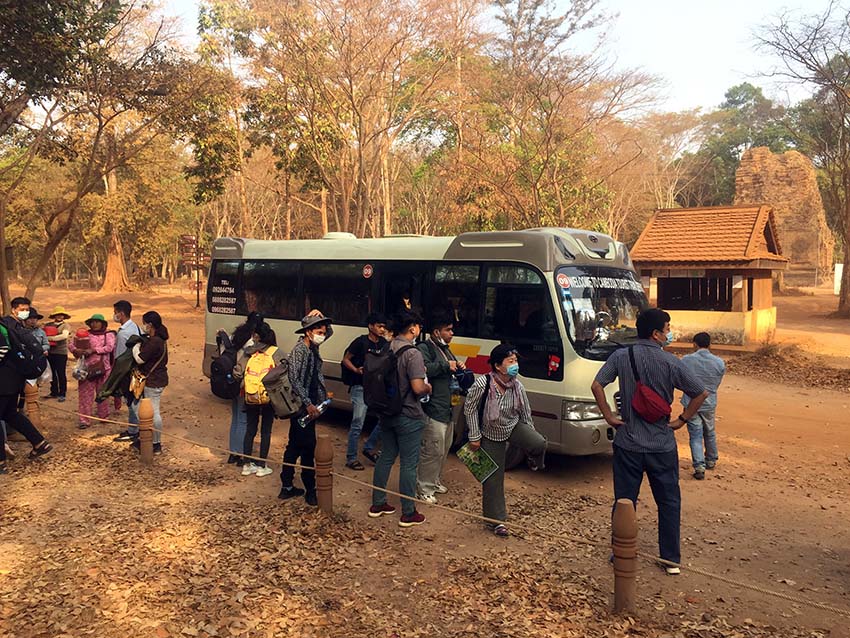 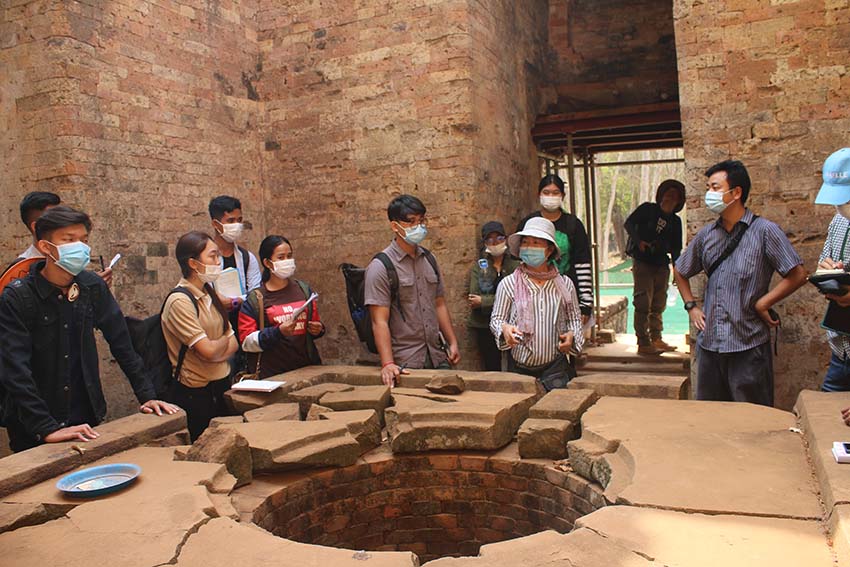 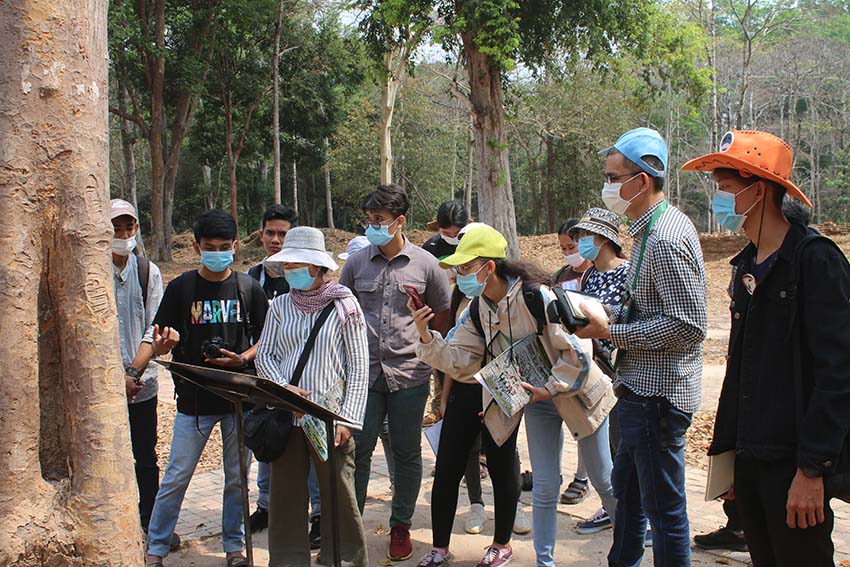 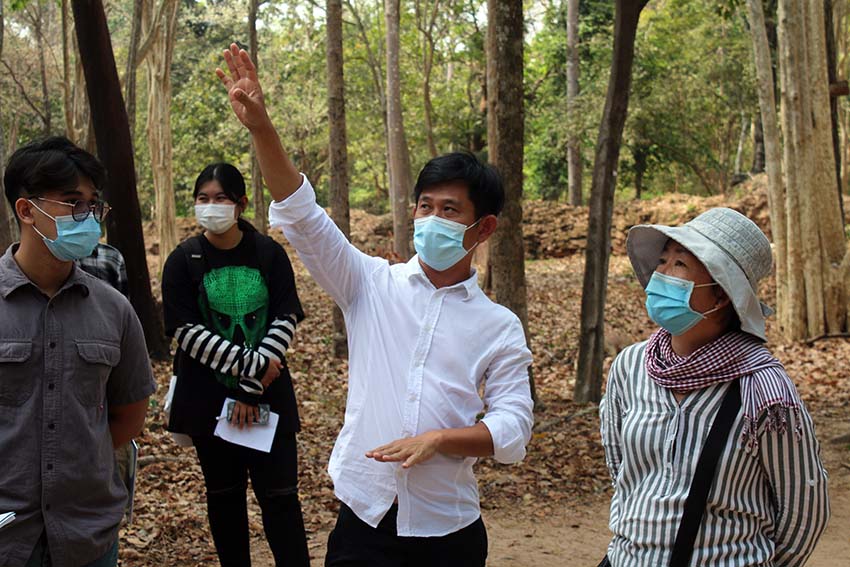 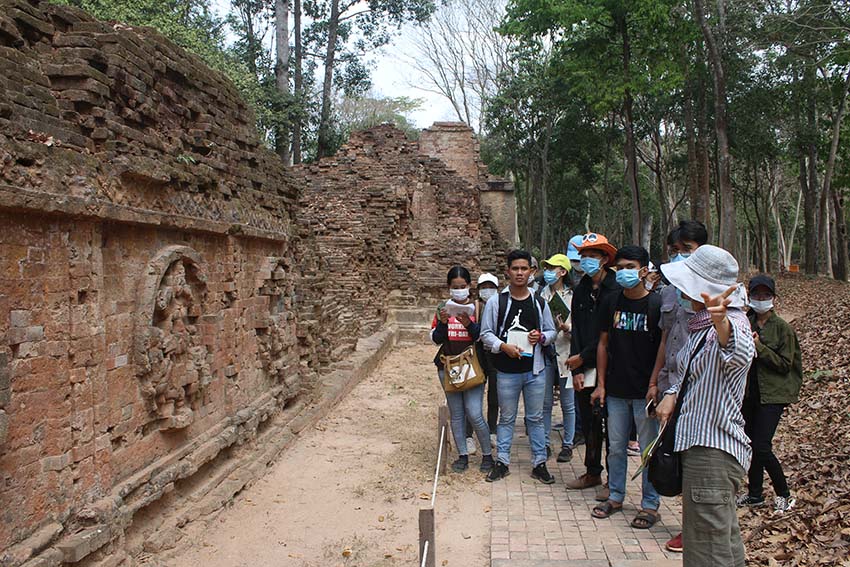 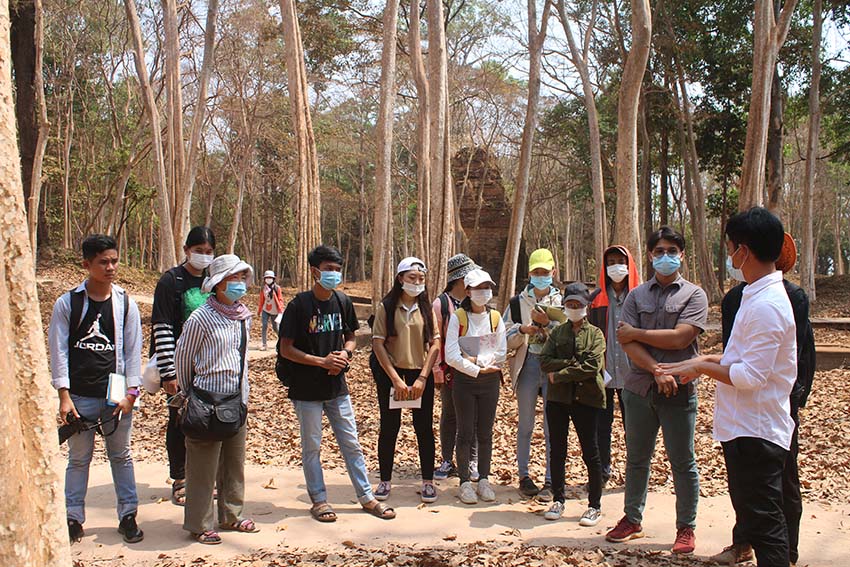 Lecture on the history and research on SPK at 4:30 pm by Mr. Chan Vitharong

-  Showing the map of archaeological site in Cambodia

-  What special about SPK are:

-  Causes of damage are from nature and human

-  LiDAR images showing us the city infrastructure of Isanapura